Dr Sven Vrdoljak from Wildtracks who with his brother Pete has helped us out massively with regards to all things angling very kindly wrote this about angling here at Kaingu:

In terms of fish diversity, the Kafue system has a total of 68 indigenous species (according to a report by Biodiversity Foundation by Africa). Obviously not all of these are species that would be targeted by anglers but there are a few groups of interest:

The most diverse group of angling fishes will be the serranochromine (largemouth) breams of which there are nine species in the Kafue system. These include, thin-faced bream, purple-faced bream and of course the nembwe (yellow-belly) all of which are large predatory fish sought after by anglers. Nembwe can grow up to 3.5 kg in weight. They will take a variety of spinners, lures, flies and live or artificial worms. 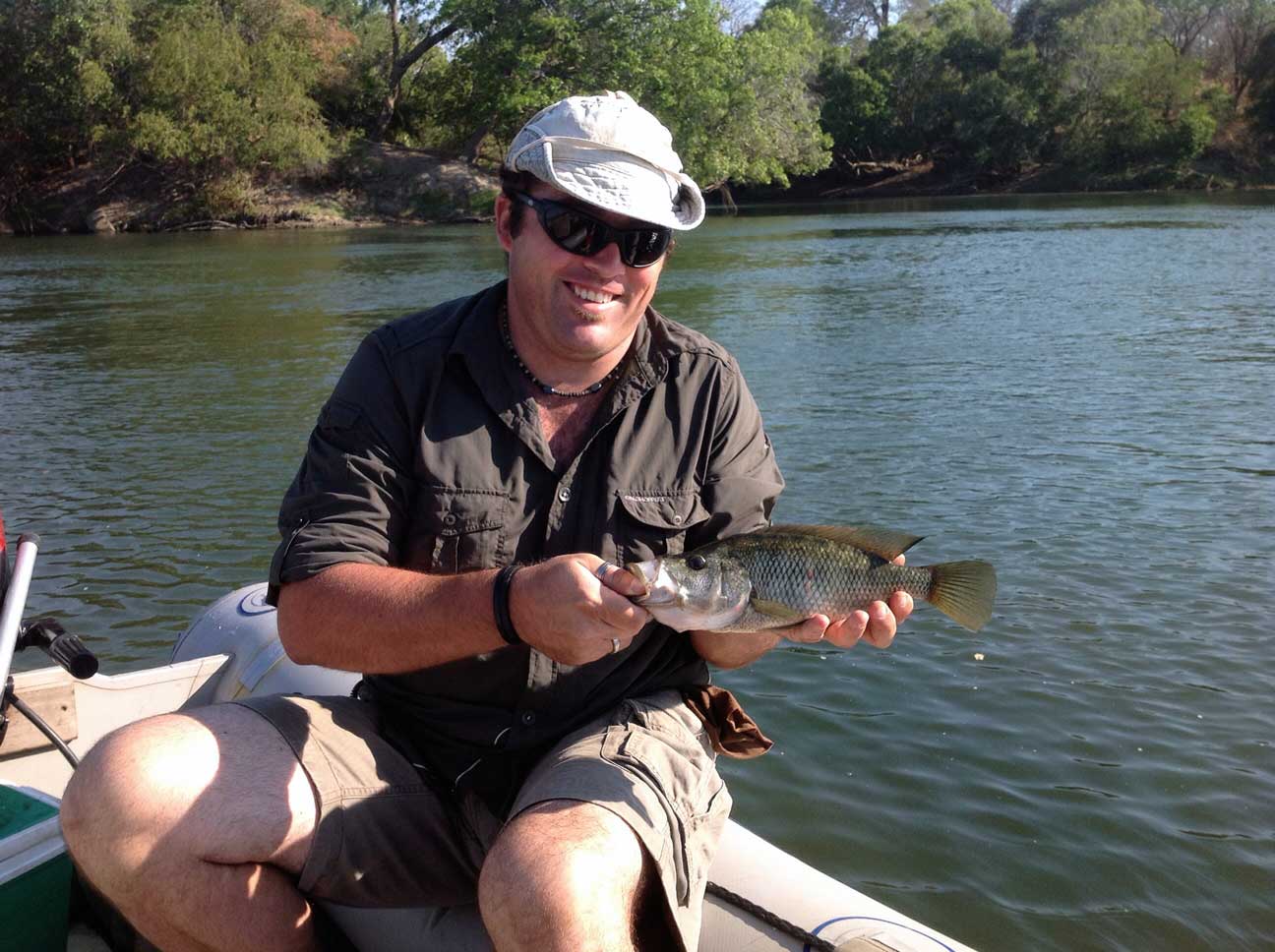 Dr Sven with a thin-faced Bream

Another distinctive Kafue predator is the African pike. With their large teeth they feed almost exclusively on fish and usually inhabit the quieter backwater areas. Females grow larger than males and may attain up to 2 kg. They are good fun on light tackle and will also take a variety of spinners, lures and small spoons. 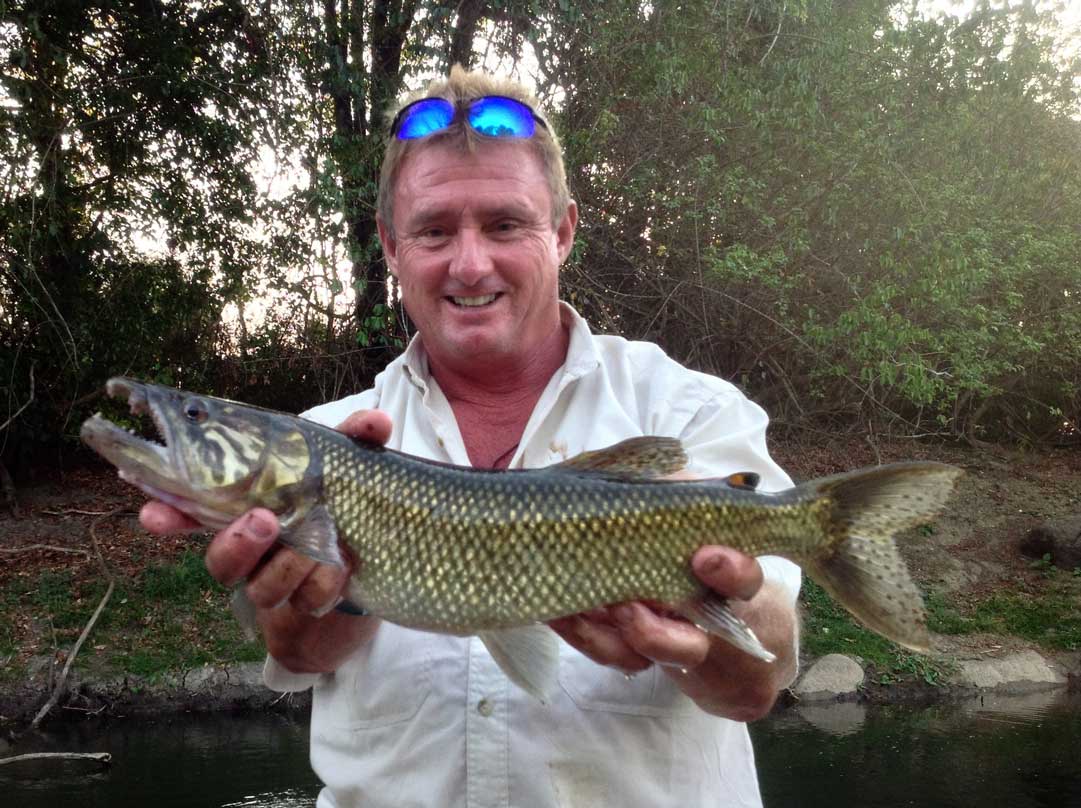 The Kafue also has a number of catfish, the largest being the sharp-tooth catfish which is widespread in Southern Africa. Around KaingU these tend to be very darkly coloured, hence them being referred to there as ‘black barbel’. An extremely strong fighting fish, they are more suited to heavier tackle. Although your KaingU record is 11 kg, elsewhere they can grow to over 50 kg. They are omnivores and will take almost any bait, but can also be caught on lure. The other catfish that anglers will encounter is the butter barbel or silver catfish. A separate family to the sharp-tooth catfish they are a shoaling species which also have a highly varied diet. They will take cut bait or worms but can also be caught on small spinners. Anglers should be aware of the needle-sharp, barbed spines in their pectoral and dorsal fins which can inflict very painful wounds due to the poisonous mucous that covers them. 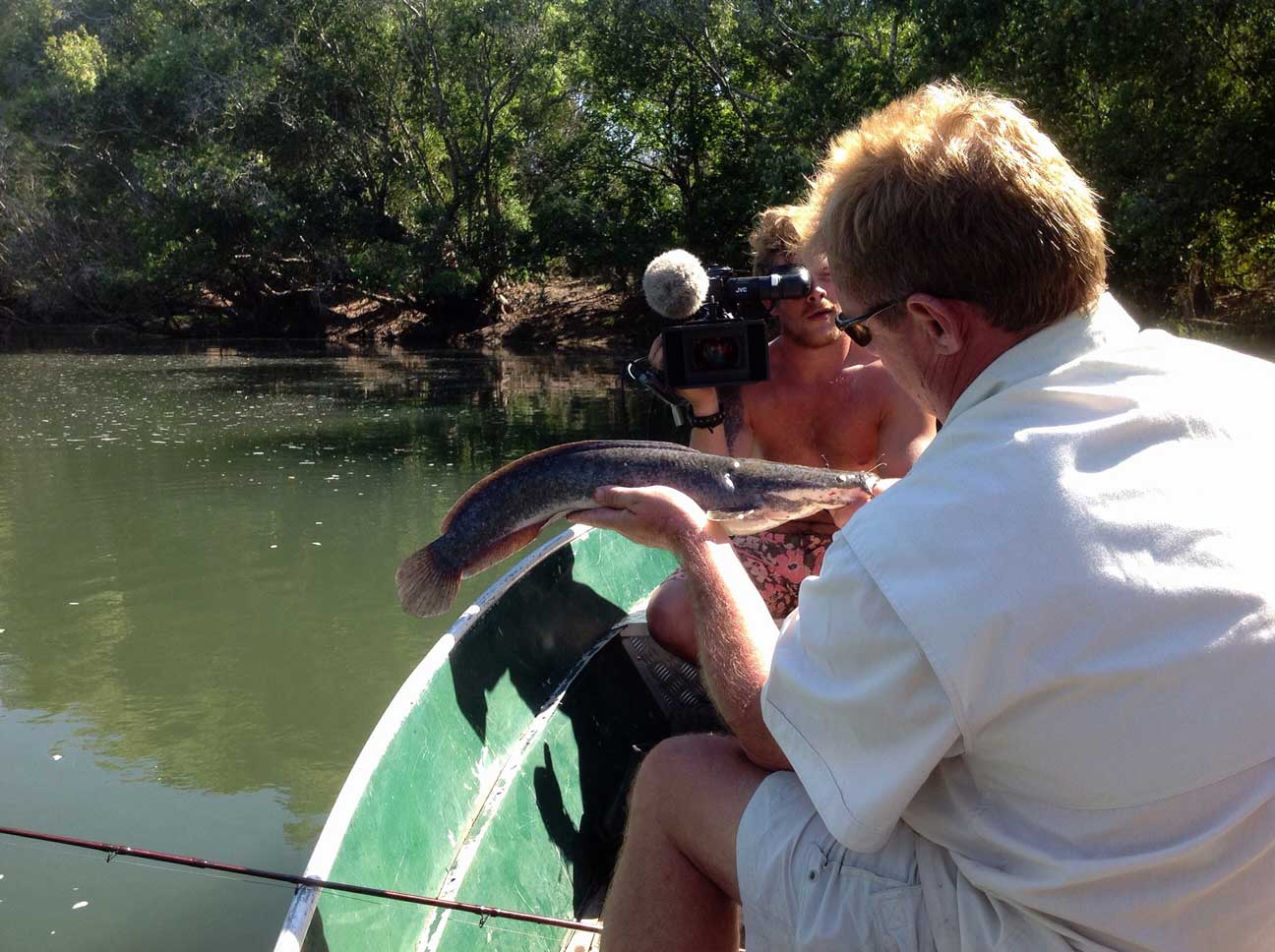 Some other interesting species that more determined anglers might catch include labeos which may be found in some of the faster shallower water. Although not really a popular angling fish in Zambia as they are often difficult to find and catch They may however be of interest to fly-fishermen (especially those familiar with yellowfish in South Africa, a related species). Larger individuals are strong swimmers and can give a good fight on fly or light tackle. They will also take worms. Another lesser known species is the western bottlenose which can be found among rocks in deeper, quieter waters. These are odd looking fish which are one of the mormyrids a group found only in Africa. They are able to generate weak electrical impulses to detect predators and communicate with each other. They have small mouths and will take worms on small hooks. The Western bottlenose grows up to 2kg.

What makes KaingU an interesting place to fish in my opinion is the diversity of habitat available from shallow riffles and rapids to deep, rocky  pools and quiet backwaters under overhanging trees. The fishing does offer something for everyone whether they prefer to use fly, artificial lures or bait and can include catching fish that they may never have encountered elsewhere. Options for fishing are also varied – fishing from the boat, rock hopping by the rapids or combining the two and spending the day island hopping and fishing among the numerous islands and channels around KaingU. 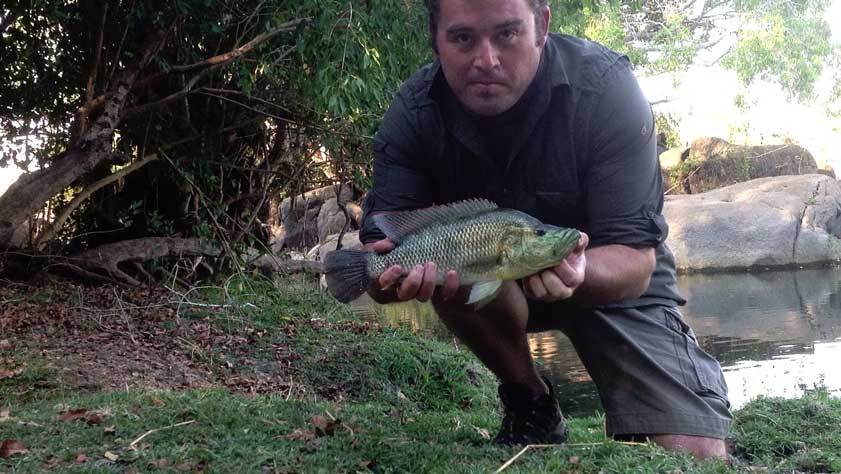 Dr Sven with a hump-backed Bream

As with all recreational fishing I would recommend that there is a good catch and release policy or at least bag limits on what guests can catch to keep. Another good way of limiting this is to have a policy that fish may not leave camp, so they can catch a couple of fish for their evening meal for instance, but not take home cool-boxes full of fish. Some simple guidelines for catch-and-release are given below: