2013 was a good year for the lodge, in fact it was the best ever year.  However this is relative, we were starting from a pretty poor position, so any growth was marked.  The “new” Kaingu needs to work even harder and generate far more bookings before we can talk about any degree of success.  We say the “new” Kaingu, and you might ask why mention “new”.  Put simply, 2013 was a watershed year for Kaingu.  Rick and Lynda had joined the lodge in 2012, and already 2012 was a year of sudden growth relative to the previous years.  At the beginning of 2013 Julia and Gil joined them and a solid team was formed.  Lynda focussed on marketing and reservations (we took a decision to pull this back to the lodge and handle it all internally). Lynda being who she is, this means sometimes we have to switch off the satellite modem to get her to stop and eat!  Rick took the finances and administration by the horns.  Julia brought her formidable creative skills – be it décor, graphics or food!  Gil focussed on technical aspects, activities, social media, website and executing developments.  The four brought very different skills to the table, but complemented each other really well – important when the four of us are living and working so closely.  So “new”;  new management, new access, new guiding, new focus, new food, new staff, new developments, new game viewing vehicle (which is one of the best in the country!), new boat on order.  I think you get the picture and why I use the word “new”…

So Lynda’s marketing and reservations work continued remotely, and we all saw in 2013 a lot of things that we wanted to change and do differently as Lynda’s efforts were starting to really net some bookings.  Not all of the changes we want to make would be possible, bigger works will have to wait to early 2015.  There is nothing finer than hard work in a camp before it opens – so long as it is organised well! So long as materials are on site, so long as there is a few cold beers in the fridge for the end of the day…  When the sunset looks like this how can it not be satisfying! 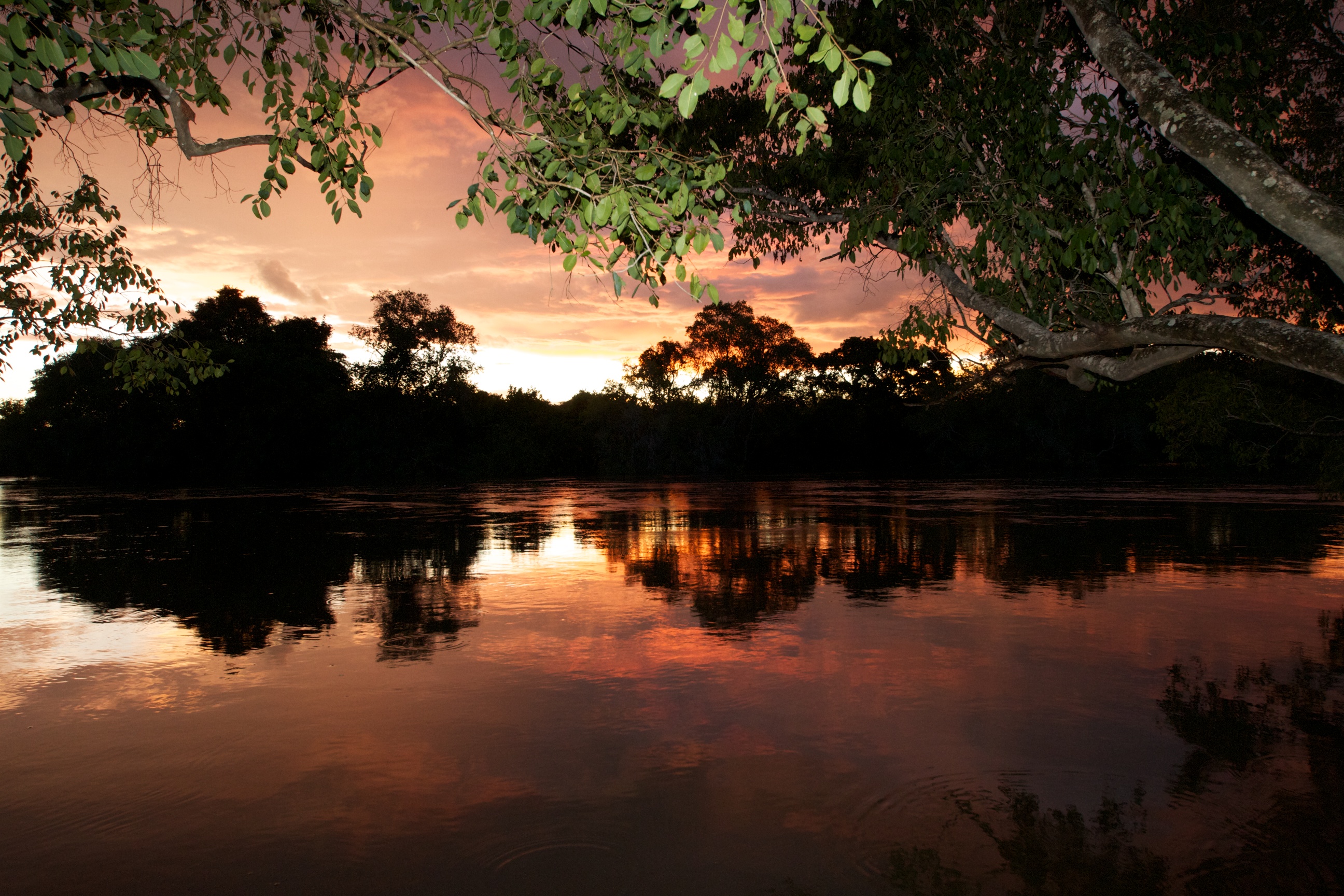 One of the priorities was to break out the old massive stone built braai.  We all felt it dominated the deck and wanted to make this the new entrance.  By doing this we could also make use of the main area better, and use the “corridor” which was lost with the old entrance being through the main area. 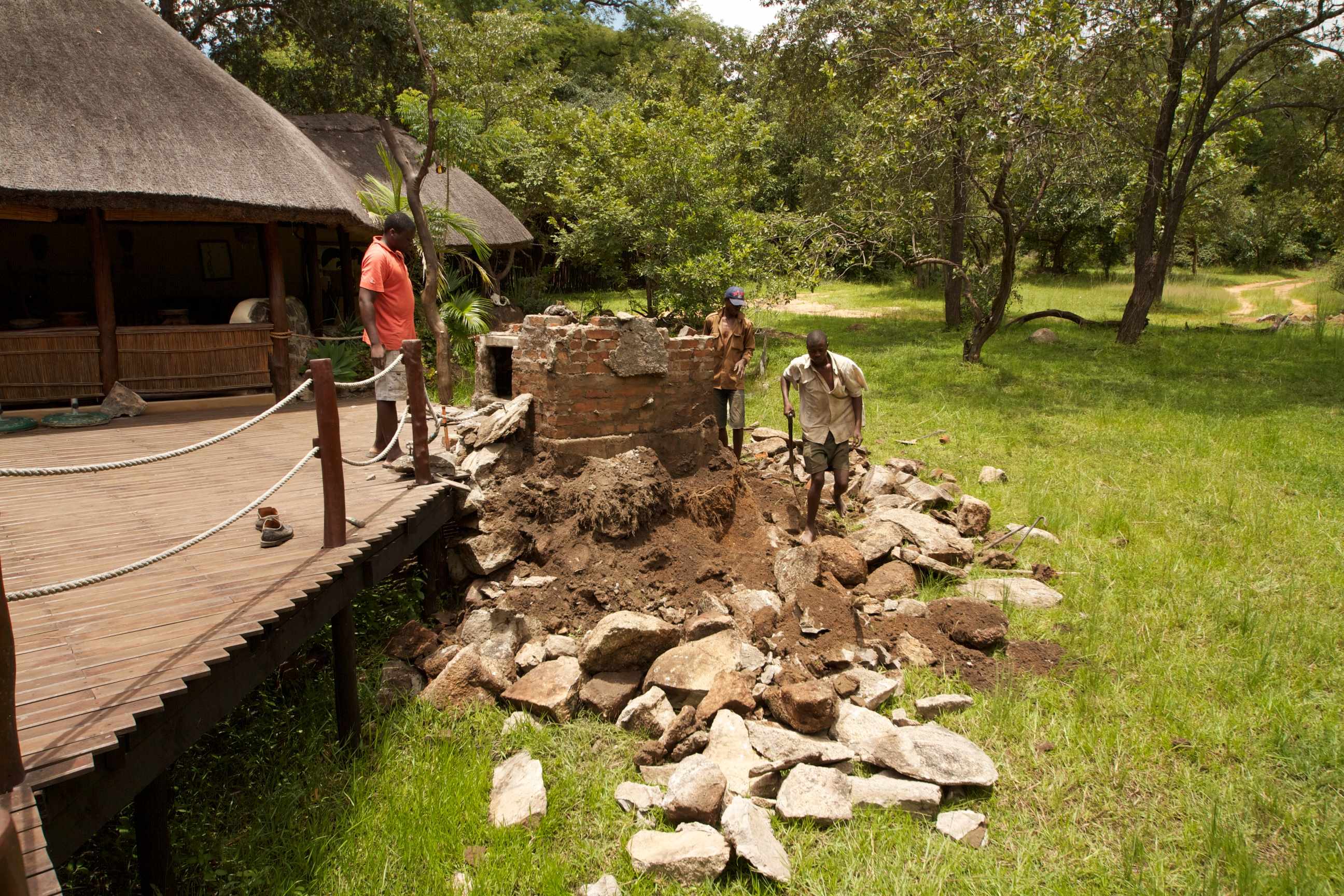 The old stones from the braai we used to start creating the new entrance.

Those that know Kaingu well might recollect the large brick built seat in the lounge area. You might then also recollect that it works if you are a giant!  For normal sized people it means your feet dangle above the floor.  Julia got “medieval” on it with a large hammer and chisel! 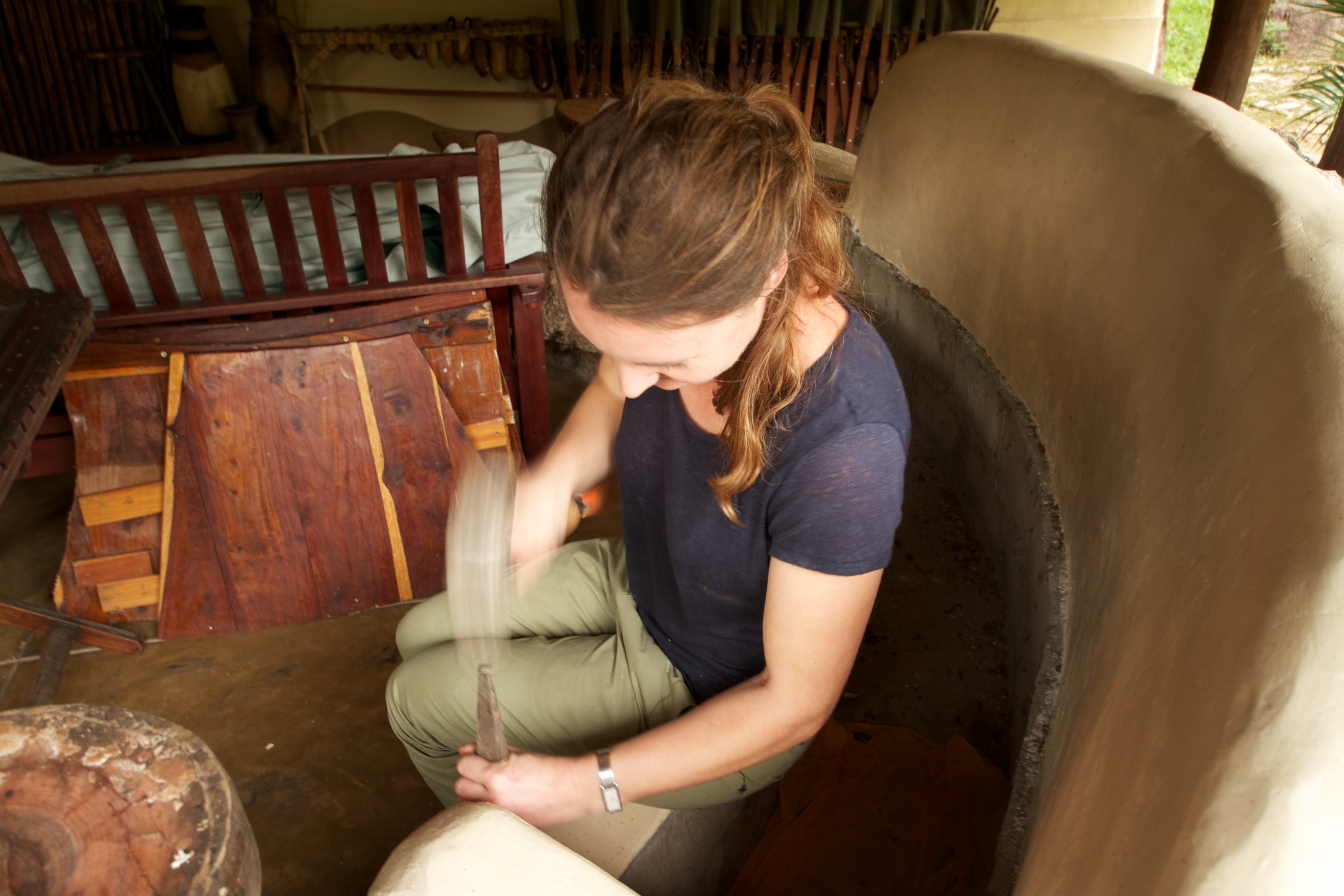 Then we started closing off the old entrance.  Planting grass, building up a half wall.  The plan is that this then becomes a small ‘library’ corner with some comfy chairs, a book case.  A sort of tucked away corner for some quiet time. 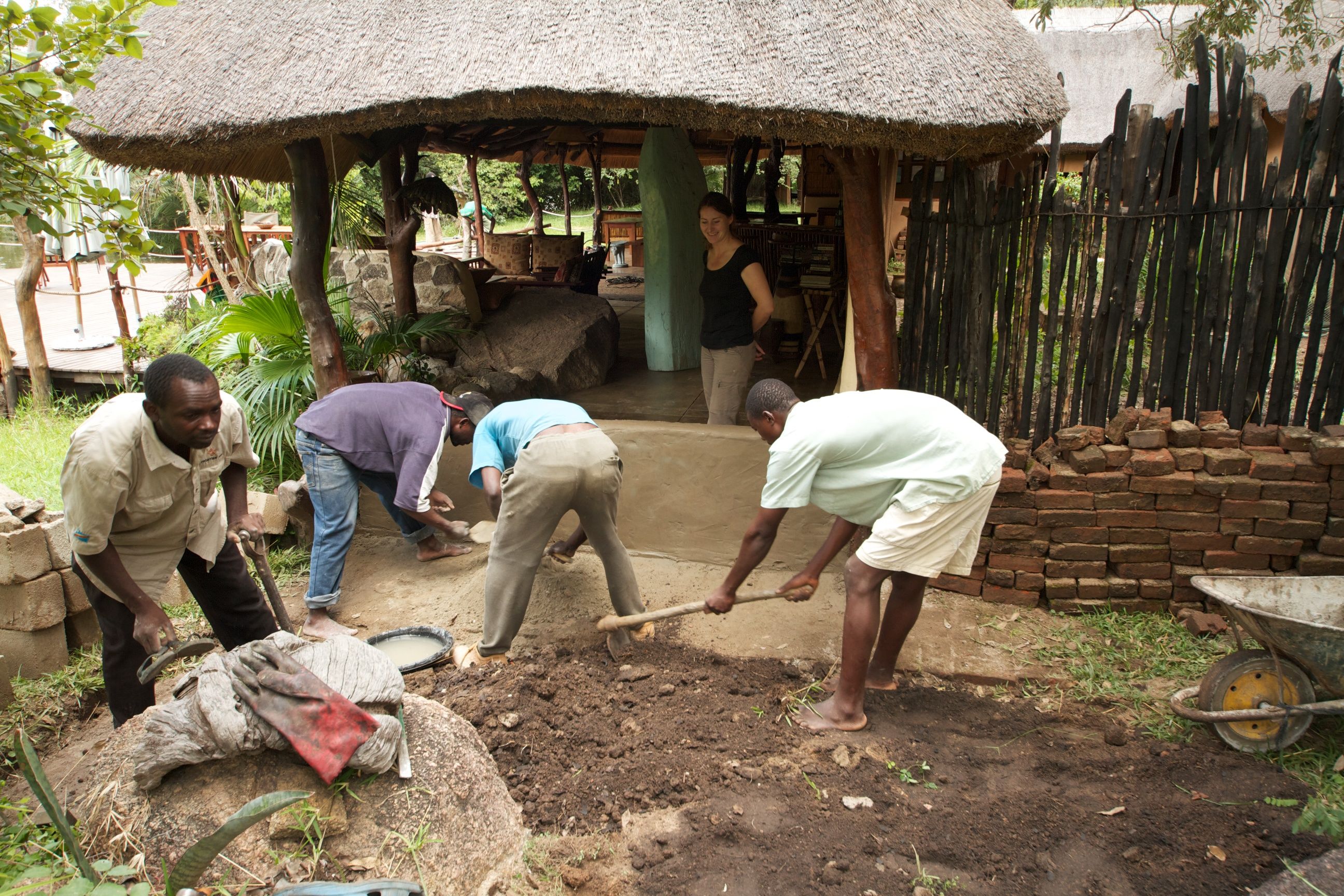 Then the bar…. This was a difficult one.  We have spent I don’t know how many hours talking about a solution here.  We all wanted it changed, but really didn’t know what we wanted, so again Julia bit the bullet and just decided to remove various bits and then add some of her ideas in terms of design. 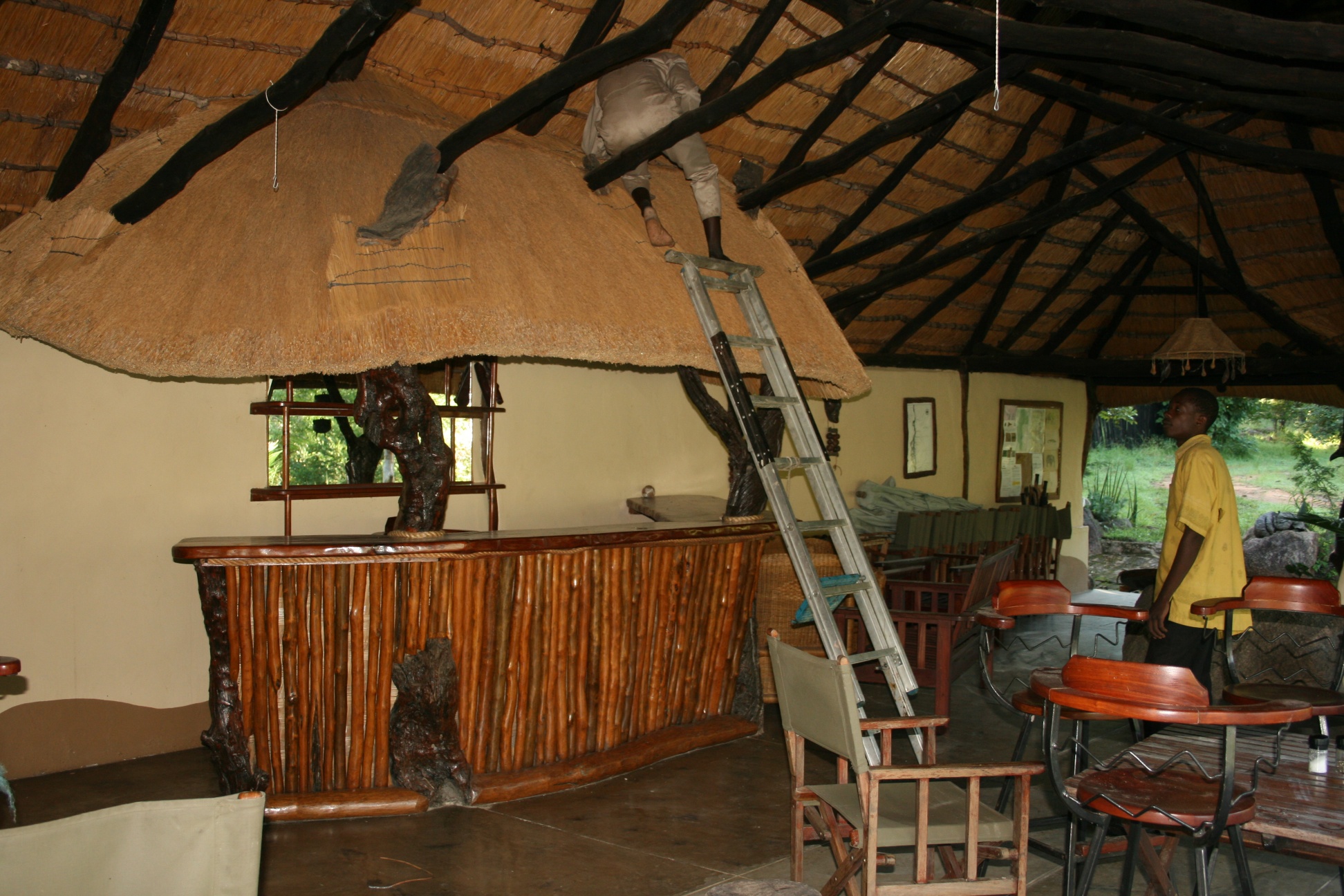 Then we started on the creation of a deck pergola.  Again to make better use of space, as the lodge end of the deck hardly gets used during the day as there is no shade. 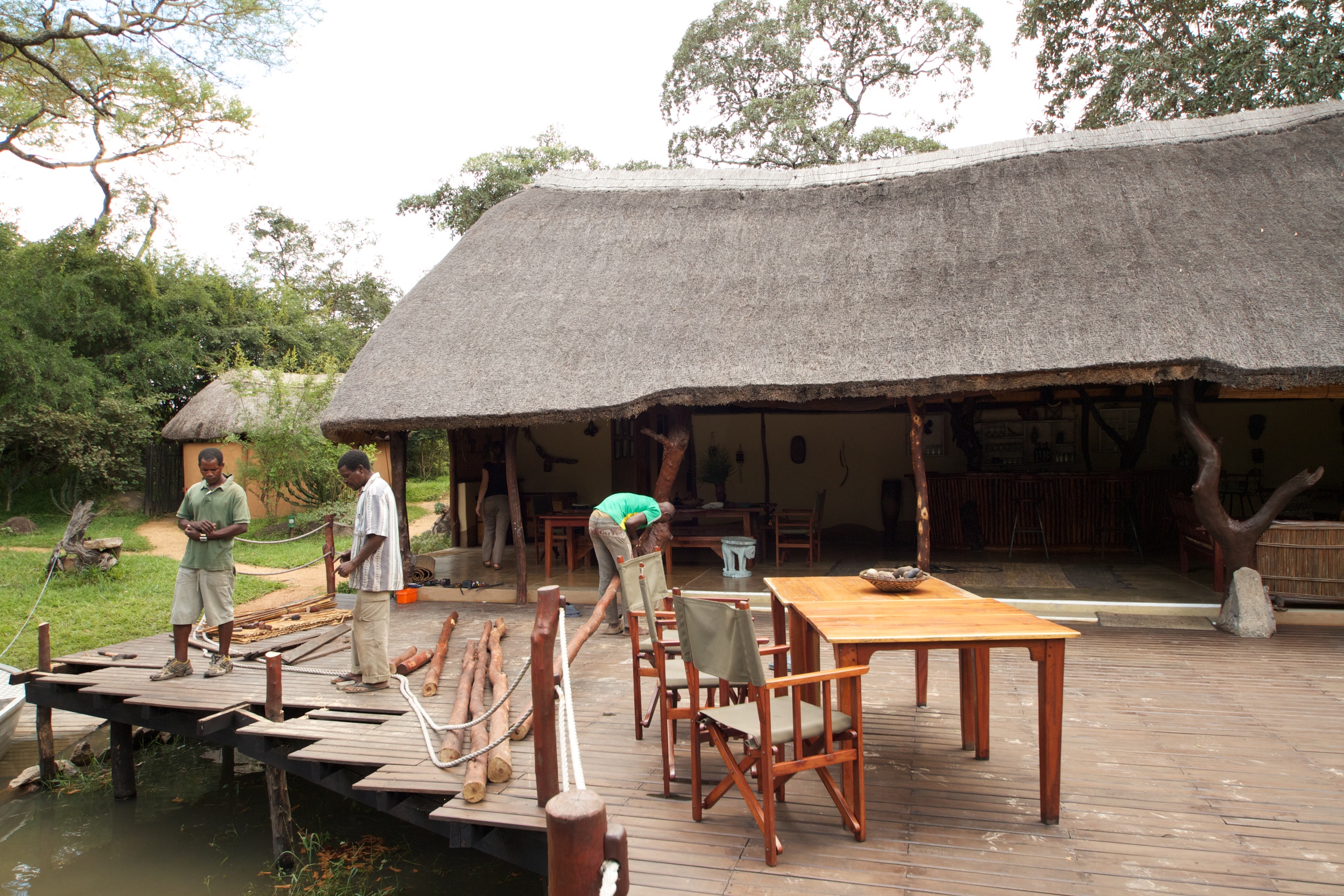 What the final results look like will have to wait as we are trying to do a photo shoot and create a whole new set of lodge images.  So stay tuned for the results.