June has been a phenomenal month for Kaingu Lodge. The sightings have been amazing, with elephants regularly crossing to the islands in front of the lodge and even lions in camp!
Guests were also lucky to see Pel’s fishing owl twice. We also saw two otters cavorting in the river downstream of one of our bush dinner spots. A canoe trip at the end of the month also were lucky enough to catch a glimpse of the elusive cape clawless otter demonstrating it’s amazing swimming prowess in the rapids. We also had some very good leopard sightings on the spinal road – two in one day! 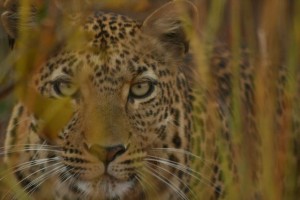 In the Park the sightings have been encouraging around the new Bush Camp site – with great sightings of Hartebeest, Kudu, Sable and even a herd of 300 Buffalo! As well as lions and leopards calling at night as well as encounters with the two cats on a walk.

The fishing has been picking up and guests have been catching decent sized bream and pike and we are very excited that we are getting a visit from a fishing TV show later in the season – we will keep you posted how it goes! 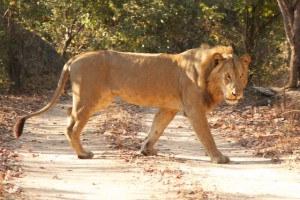 Two young males and a female provided some great adrenaline moments and sightings in the camp!

The northern section (i.e. the bet we use) of the Kafue National Park ‘spinal road’ has been finally completed. Global Construction have done an absolutely outstanding job and this really has transformed access to the camp. We thanked the site engineer for such an amazing job – and told them that their workmanship and dedication is way beyond the contractor in charge of the southern end. The good northern end means that guests coming here have a smooth ride through a national park without a single pothole. Coming to Kaingu is now far, far easier than before. While we are on the subject of roads it seems official that the other route here – the Itezhi Tezhi road is finally going to be repaired. The road was tarred in the early 70s when the lake dam wall was constructed and now it seems it will be again! This is fantastic news for us as well as the villages and town itself. 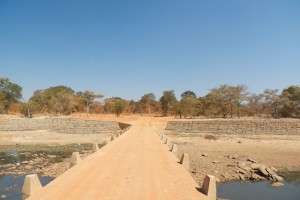 Just an example of the high quality workmanship on the new spinal road which has just been completed through the Park.

We have done a lot of interesting dining recently – at the rapids downstream of the camp as well as the famous Mpamba rock. We put on a special “winter solstice” dinner that was to celebrate the solstice, the ‘super moon’ as well as the 7th visit of a couple that keep returning from Norway to see us all at Kaingu!

Our proposed bush camp site has been the subject of lots of focus, we have been planning driving loops and walking trails and the sightings have been very encouraging! Sable, Hartebeest, Lion, Leopard have all been seen there. More news soon. 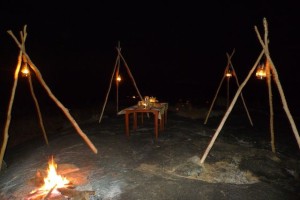 Our winter solstice dinner on the rock.

Our partners in canoeing (Mawimbi Adventures) are also having a good month, the first canoe trail was run and a great trip from Kaingu south was also run. Meanwhile Bernard is busy with the logistics of the new tents and interiors for the Mawimbi Bush camp.

That is about it for this month – it has been a great month in terms of bookings and July looks also good. Oh, we nearly forgot – we also became number 1 on Trip Advisor for the Kafue! 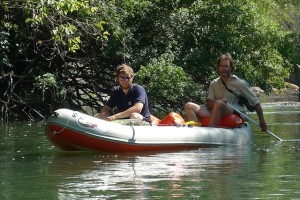 The canoe trail south of the camp is a mix of slow and fast water – this is the slow. 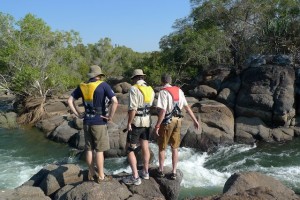 But some sections are much, much faster! Here is Bernard giving some tips on how to get through.